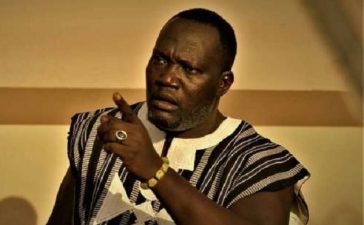 Former Manager of Lilwin – Zack Gh in an interview with Kobby Kyei touched on how Kumawood actor Benard Nyarko passed away.

The hearts of many film lovers have broken after news went viral that Benard Nyarko has passed away.

The likes of Akumaa Mama Zimbi, Xandy Kamel, Tracy Boakye among others reacted to the sad news

The rumours surrounding his death are very shocking.

According to Zack Gh, he recently got in touch with the man of God who even prayed for him.

He said upon hearing the news, he called the late’s brother, and he was told Benard had died at Ridge Hospital.

Zack further said Benard’s brother who was with him at the time he passed away, said the celebrated actor has really suffered.

From how Zack spoke, it is very evident that Benard died through a spiritual battle.

The family of the deceased is yet to officially pass comment on the issue.

VIDEO: Should I commit suicide or do prostitution? – Widow cries

Lord Paper ft Medikal – Love No Catch You Before (Remix)