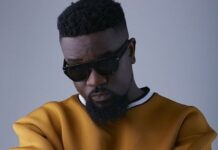 The management of Ghanaian rapper Michael Owusu Addo popularly known as Sarkodie has denounced rumors of his death.

From nowhere rumors of Sarkodie being dead surfaced online.

The news of the rapper’s death was first spotted on an online TV station called Agyaadu TV. Social media users have so far been calling for the arrest of the owners of the company.

Reacting to the news, SarkCess Music has urged everyone to disregard the outrageous news.

“Sarkodie is NOT dead”, management of the ‘Come Back’ rapper noted addressing the false news.

This comes just days after news went viral that Ghanaian dancehall artiste Shatta Wale is dead. Of course, that was false news as well. Shatta Wale is not dead.