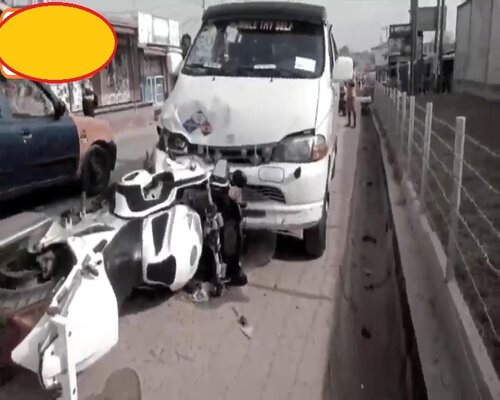 Reports reaching us from Kasoa in the Central Region indicate that a passenger vehicle popularly known as trotro has crashed a police dispatch rider.

The incident, according to an eye witness who spoke on Nhyira FM in Kumasi, happened on Wednesday morning at about 7:30am

The report also suggests that the accident happened as a result of a bad road filled with potholes constructed barely three years ago.

The driver whose name is yet to be known crushed into the police officer while swerving a pothole on a section of the road.

Colleague policemen in the area confirmed to MyNewsGh.com that the victim who suffered severe injuries has since been rushed to the hospital for immediate attention.

The driver has also been sent to the Amanfrom Police Station in the Central Region for further investigations.

Meet the pretty lady behind MTN’s annoying “you have insufficient credit to make this...