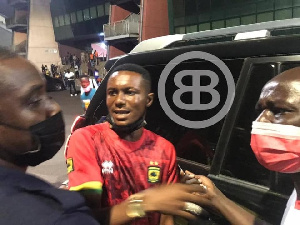 Kumasi Asante Kotoko in October 2020 signed a kit sponsorship deal with manufacturer Errea and whilst official replicas of the club’s jersey is yet to hit the market, the Ghana Premier League giants have started taking steps to curb fake versions of its jerseys from circulating.

At the end of the club’s recent Premier League fixture against Aduana Stars at the Accra Sports Stadium, officials of Kotoko are reported to have caused the arrest of one of its fans who was spotted wearing a fake copy of the yet to be launched Errea Jersey.

A Facebook user, Frank Mandela Bawumia reporting the incident on his social media page, added a picture of the said fan being confronted by officials of the club.

According to Frank Mandela Bawumia, the fan was handed over to the police by officials to assist in investigations.

However, despite efforts by Kotoko in ensuring the fake jerseys do not get to market, Frank Mandela Bawumia avers that the jerseys may already be up for sale in markets including Kantamanto and Tudu.

On December 28, 2020, Kotoko in a statement cautioned members of the public in trading or wearing pirated copies of the club’s jersey saying such persons will be prosecuted. 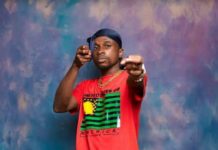