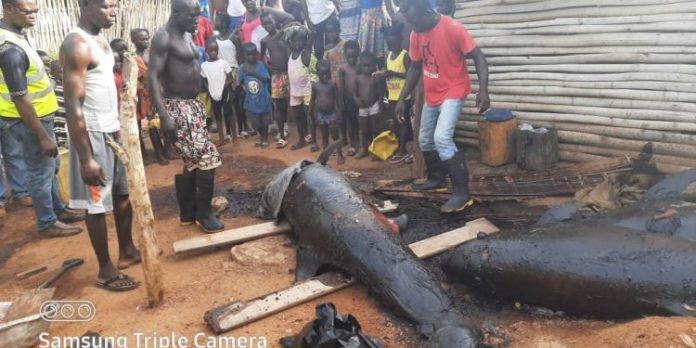 Following Citi News’ report on fishmongers in Axim preparing some of the dolphins that were washed-ashore last week for sale, the Nzema East Municipal Chief Executive, Frank Okpenyen, with the support from the Food and Drugs Authority (FDA) and the Police have moved in to confiscate it.

When the team arrived, they found a basket full of already smoked dolphins together with about 20 dead dolphins.

They subsequently seized the dead sea mammals and the smoked ones.

Speaking to Citi News in Axim, the MCE said he is working hard to retrieve all the dolphins that were washed ashore but taken by individuals to their homes for sale or consumption.

He said he is doing to ensure the safety of the public.

After the dolphins washed up on Brawire Akyenim coast, “residents who were around at the time they appeared started to attack, kill and sent some home for domestic and commercial purposes.”

The assembly in a statement indicated that some 200 dolphins were washed ashore, and it was able to retrieve 68.

“Out of these, 30 were alive and 38 were dead. The team released the live dolphins back to the ocean and buried the dead ones at the Assembly’s refuse disposal site. The remaining 132 washed-ashore fishes are in the hands of the residents.”

The assembly says it is currently working with security agencies, the Environmental Health Officer and Chief Fishermen “to retrieve the remaining fishes sent home by some individuals for domestic and commercial purposes.”