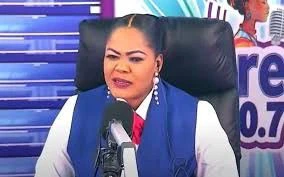 Ante Naa and Oyerepa FM is in trouble as they prepare to answer questions infront of the National Media Commission. The basis of the whole controversy is being initiated by VIP Bus management.

According to the VIP Bus management, Ante Naa brought a certain lady into the studios of Oyerepa FM for an interview. In the said interview, the lady alleged that a VIP bus driver allegedly slept with her on countless times in one of their buses. After the act, efforts for the driver to compensate her fell on deaf ears.

The lady later appeared on Oyerepa FM to name and shame the VIP bus driver. Due to this, management of VIP jeoun Transport finds the said interview as offensive. This is because their brand was attached to the scandal.

They were also offended as to why Ante Naa refused to invite management of VIP buses to narrate their side of the story than disgracing them on radio.

Management even explained that the said act in the bus never happened. They are therefore reporting Ante Naa and Oyerepa FM to the National Media Commission to be brought to order.

‘Bloggers Are The Reason We Live Fake Lifestyles’ – Kwaku Manu

Shatta Wale – What Deh Go On (Prod by No Joke)