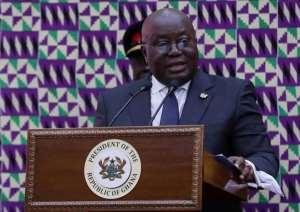 President Nana Akufo- Addo is expected to be in Parliament today, Wednesday March 30, 2022, to present the State of the Nation Address.

Article 67 of the Constitution mandates the President to present the address to Parliament at the beginning of each session of the lawmaking body and before the dissolution of the house.

The address sets out government’s key policy objectives and deliverables for the year ahead. It will give President Akufo-Addo the opportunity to highlight the achievements of his government, challenges faced and also outline developmental measures for the coming financial year.

Deputy Majority Leader Alexander Afenyo-Markin had mentioned that the President is ready to present the State Of The Nation Address (SONA) but leadership of Parliament was yet to agree on a date for the President to come.

He explained that the duty of the Speaker of Parliament and Leadership in the House is to agree on a date and communicate same to the President.

However, that agreement was initially not reached for it to be communicated to the President thereby President Akufo-Addo cannot be blamed for the delay in presenting the State of the Nation Address.

Afenyo-Markin said on the Floor of the House on Friday March 18, after Member of Parliament (MP) for Adaklu Kwame Agbodza had raised concerns regarding the delay in addressing the nation.

Mr Agbodza had described the situation as unprecedented in the history of the Fourth Republic.

“This is an unprecedented territory. We have never seen a president who is unable to tell us the state of the nation this long. We think that we need a definite date,” he said.

Affenyo-Markin insisted that the president was not out of time and will deliver the address as per Article 67 of the 1992 Constitution.

“The President is not out of time,” the Effutu Member of Parliament pointed out.

“He is within time required to come, so we are putting our House in order as a House”, he said.