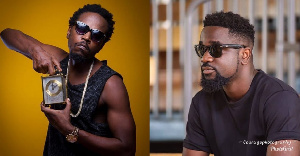 What could have become a great remix to a song in the Ghanaian music space in recent times will not happen.

Following the decision of Sarkcess Music boss, Sarkodie to tweet the latest song of Kwaw Kese on his Twitter handle, the latter tried to get the former on a remix of the song.

Kwaw Kese quickly reacted to Sarkodie’s tweet asking whether he will want to give him a verse for the remix of his new song.

The tweet from Kwaw Kese did not get the desired reply he might have wanted because Sarkodie turned him down in a rather sarcastic manner saying, “Boss.. I beg oo it’s dope as edey… wicked Tune.“

Trolls have been having a good laugh at Kwaw Kese following Sarkodie‘s decision to deny him the feature in a ‘perfect’ manner.

It all started on Twitter after Sarkodie reacted to Kwaw Kese’s new song ‘Cash Up’ which features budding musician, Skonti by sharing a link to the song with some fire emojis.