Ghanaian rapper Medikal has finally reacted to claims by some netizens that a Rolex watch he bought for $10,000 (Ghc60,000) is fake.

This comes up after he was trolled in a series of post from netizens for rocking and flexing with a fake Rolex watch after he was spotted in a Rolex shop.

Reacting to trolls on social media Medikal has said that a if a watch which cost him Ghc60,000 to purchase is considered as fake then that is probably all that he can afford. 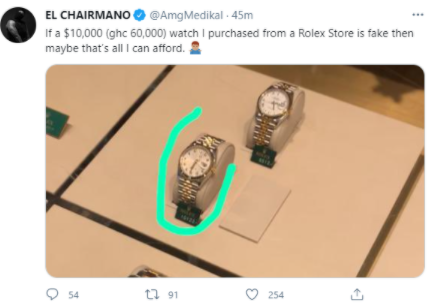 All You Need To Know About Ghana2pac Aka Supa Biography