Home Entertainment Teacher Left With An Érected Pênis After A Pastor Gifted Him A... 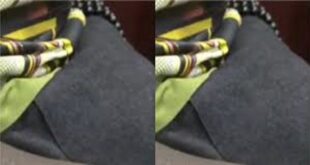 A 35 year old school teacher has been left with an èrected pènis after a pastor gifted him some items.
Narrating his story, the school teacher disclosed that he had a chronic illness and he usually went to Okomfo Anokye for treatment.

According to him, on occasion he met a pastor who told him he wants to help him with illness after he realized he was someone he usually comes to hospital.

Asking the pastor how he will helped, the school teacher that the pastor gave him a 32 inch Flat Screen Samsung TV, a 12 inch mattress and some chairs.

He added that after receiving the items he woke up with an erected penis.

According to him, after so many attempts to bring his p3nis to its original state proved futile.

The school teacher indicated that he then went to the pastor informing him that this was what happened after he took his items.
The pastor then took him that the only his erected penis will go back to its normal state is if he gives him his sister to marry.

THE SICK VS THE MAD; THE CASE OF NAYAS AND ERNEST OPOKU