Home News The gods are angry with me for having sex in the Bush... 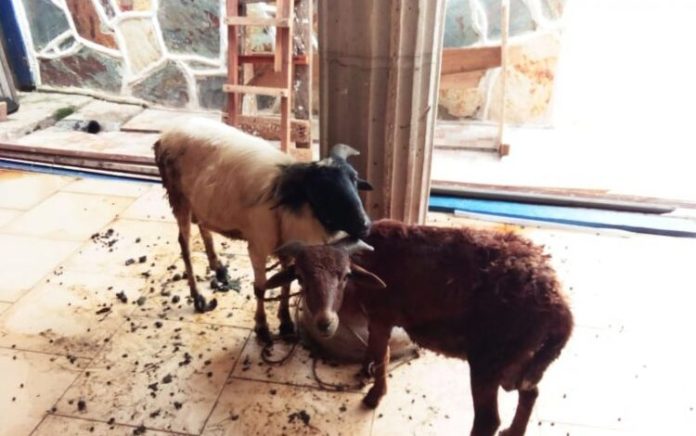 “We’ve had sex so many times in the bush because we thought if we do it home, the man’s wife will catch us,” Abena Ataa has said

The chiefs and elders of Affutuakwa Traditional Council have made a sacrifice with 2 sheep (ram) to pacify the gods for a 32-year-old Sobolo seller called Abena Ataa and her boyfriend for haven sexual intercourse in the bush in Assin Fosu Municipality of Central Region.

Speaking to Abena Ataa, she said a married man, Mr. Tettey proposed love to her and promised to buy a mobile phone and also dashed her Gh¢150.

She however accepted the love request, the sake of the mobile phone, and the money she was promised.

Abena Ataa exposed that in order not to make their relationship known to the man’s wife they invariably had sex in the bush.

“We’ve had sex so many times in the bush because we thought if we do it home, Mr. Tettey’s wife will catch us,” Abena Ataa stated.

The Sobolo seller said, despite having much abominable sex, Mr. Tettey did not buy her the mobile phone neither did he give her the money (Ghc150) promised her.

Abena Ataa further declared that the abominable act has hunted her anytime she goes to bed.

“I use to see a fair lady in my dreams, warning me to stop having sex in the bush, she tells me she’s the goddess of the land.”

“Also, one day I met a fair lady physically, and she cautioned me to make a sacrifice to cleanse the gods of the land else it will go against me,” Abena Ataa told SN24 News in an interview.

For the fear of not being killed by the gods, she went to the acting paramount chief of Affutuakwa Traditional Council, Nana Afenanse v to report herself on what she has been doing in the bush and what the gods are asking her to do.

The chief then ordered the sacrifice where they made it yesterday.

Two rams were slaughtered to appease the gods.

UGANDA LOOSES THEIR CURRENT SPEAKER OF PARLIAMENT IN MYSTERIOUS DEATH