Home Entertainment UK Based Ghanaian Rapper, Jhay Alpha Has Released The Visuals For His... 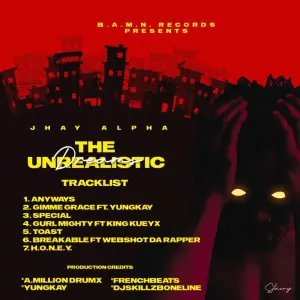 Young Ghanaian rap artiste, Jhay Alpha who is based in United Kingdom has released the first visual of his trap gospel song, ‘Anyways’ which is off his EP, “The Unrealistic Dreams”. The track, ” Anyways is the first track of the EP.

The video, which was shot in a church was made to fit exactly the concept of the song. The video was directed by Wizxy Shot It, in Ghana. The production credit also goes to A million drumx.

Watch the video yourself and judge whether it was nicely put together or not.

Also, stream and buy the album from below.

Shatta Wale – I Am Blessed